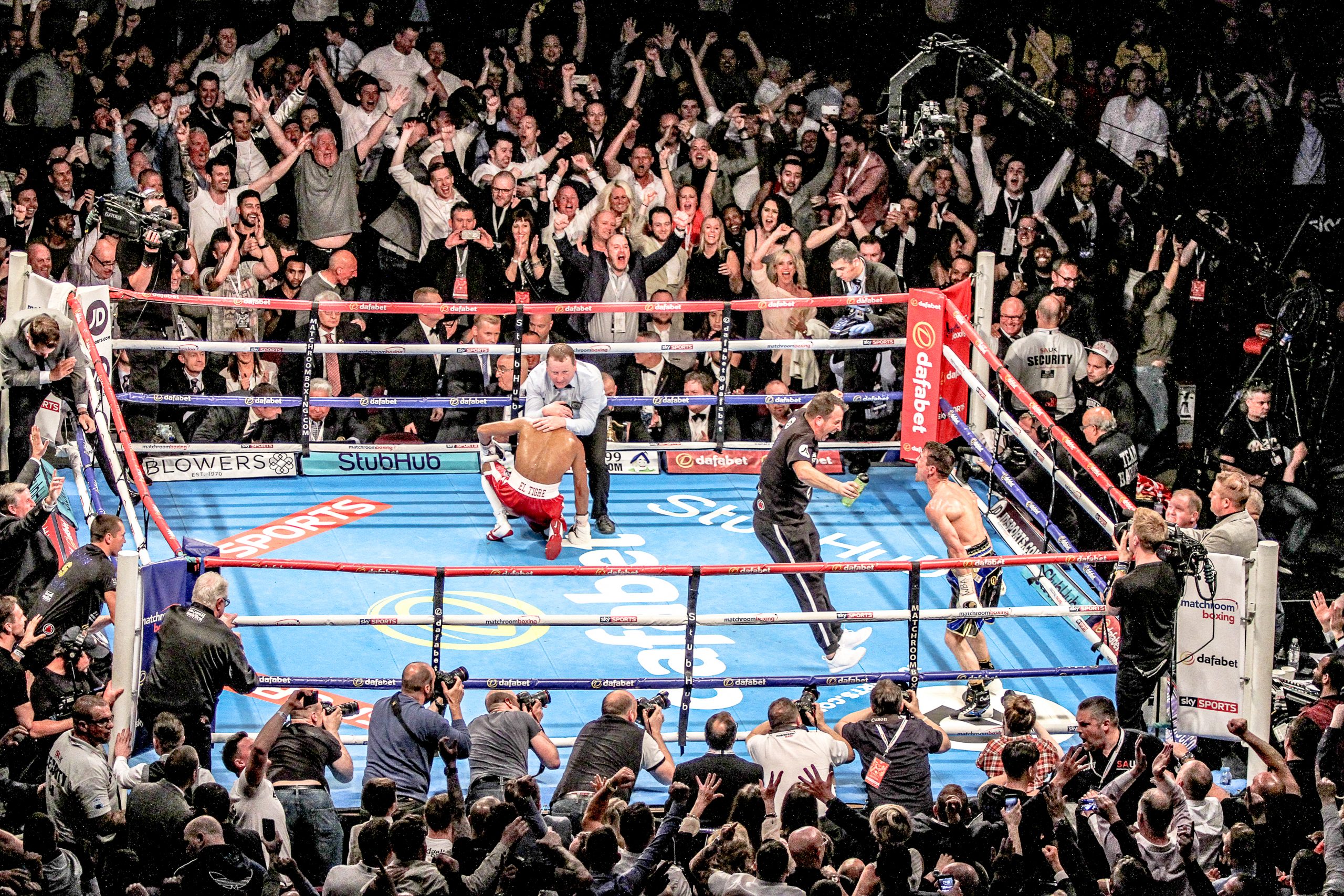 Brilliant write up from Luke Reddy from BBC Sport ahead of Anthony Crolla’s finale.

Snapshot below – full article link at the end.

The bell sounds and there are three minutes on the clock. This is the final round Anthony Crolla will ever spar as a professional boxer. One more time around.

There have been thousands of these three-minute segments since he put gloves on roughly 23 years ago. Each segment and its consequent sweat-soaked learning added up to deliver a world title, sold-out arenas and an adoring fan base. There were also a few lows thrown in to boot.

“I am in love with the sport and that’s why it’s so hard to let go,” he tells BBC Sport.

This Saturday, when he faces Spain’s Frank Urquiaga for the WBA continental lightweight title at the same Manchester Arena he frequented for fights as a kid, he will have to let go.

Crolla spars 12 rounds against three men on rotation. He pumps sweat, his shirt stuck to his sodden torso.

“I remember my dad taking me to the gym,” adds Crolla. “I can remember my first spar, my first fight, I’ve been in love with boxing since.

“I’ve thought about this being the last fight but also thought that I can’t think about it being the last. I’d get emotional and nine times out of 10 in boxing you can’t fight on emotion. I will get as emotional as I want afterwards.

“I think I will struggle a bit [afterwards] and I have to prepare as best as I possibly can. It’s not a fear, it’s more a realisation and acceptance.

“There will probably be times where I will be in the gym and think ‘should I go again?'”

“He keeps running, Anthony, he thinks he’s got it on points,” says Gallagher, who wants his fighter to chase in this final sparring round to mimic trying to close any deficit on fight night.

The man himself knows the risks all too well. His 2012 points win over Kieran Farrell led to the then 22-year-old collapsing in the ring and having to retire from the sport with life-changing injuries.

Fast forward to tragic deaths in the ring this year and the necessity of a well-timed exit plan is clear.

“It certainly hits home,” he says. “I have been in fights where careers have ended. That plays very hard on me. When something happens now it comes flashing back. We all know the risk we take.”

Crolla’s own brush with near-tragedy occurred outside the ring when he was hit with a concrete slab while confronting burglars at his neighbours’ home in 2014. He was said to be “lucky to be alive”.

He had spent two years rebuilding from back-to-back defeats to finally secure a world title shot, only for his good neighbourly act to prompt a postponement.

Some seven months later he returned to draw his title shot, before winning a rematch with Darleys Perez. Footage shows the contorted faces of young men bellowing encouragement during his ring walk on a raucous November night.

“A rollercoaster, a rollercoaster,” is his summation of two decades in the sport. “A lot more highs than lows thankfully. I think it’s a bit of a one off. Not many people have had the career I have had.

“I don’t mean what I have achieved but the ups, downs and ups again. It’s something I am going to find hard to let go, but I’ve got to.

“There are things I would change but everything happens for a reason and I am so thankful to have had the career I have had.”

Crolla rolls under the bottom rope and perches himself on the ring’s edge, his sparring days are over. Former world champion Liam Smith – nicknamed ‘Beefy’ – taps his shoulder respectfully. “Cheers Beef,” he replies.

He is understandably drained, a stark contrast to the bouncing, screaming figure seen moments after toppling Perez when he jumped up on the ring ropes and simply screamed: “Manchester!”

“I owe them absolutely everything,” he says.

“l will forever be in debt to those people. Winning the world title is my biggest achievement but my proudest achievement is the support of the people of Manchester.

“I am humbled and blessed by it, with people coming up to me in the streets telling me they were there when I won the world title.”

Self-improvement is time consuming and attending more Manchester United away games is on his ‘to do’ list when the gloves are finally hung up.

Asked about taking up any new daredevil hobbies, he responds: “I’ve already done a bungee jump and was set on fire for it. Probably not the smartest thing to do as a professional boxer.”

He adds: “I think I am going to hook up with a mate and launch some kind of clothing brand. I’d like to try that. I have my gym, so I’ll spend more time there.

“Now my task is to train champions of the future. It’s satisfactory when you see a kid in the gym who may have confidence issues and after months of work he is out there having a fight.

“It will never do it fully but I hope staying in the sport plays a huge part in filling that emptiness of not fighting.”

And so Crolla will finish up at Manchester Arena, where he made his professional debut on a Joe Calzaghe undercard in 2006.

He is the epitome of perseverance. A dozen fights in he scrapped at a Liverpool leisure centre, his 20th contest was in a hotel and his 25th took place at a Motherwell leisure centre.

His path to the top was bumpy. Three draws, seven defeats – including losses against star names like Jorge Linares and Vasyl Lomachenko – and 34 wins point to the mix of emotions he has faced.

“Perseverance has paid off,” he says. “It has been a mad career. As much as the lows felt like rock bottom, I wouldn’t change it for the world. It’s been a hell of a path. If I could do it all again I would.”

To Manchester Arena, again. One more time around.