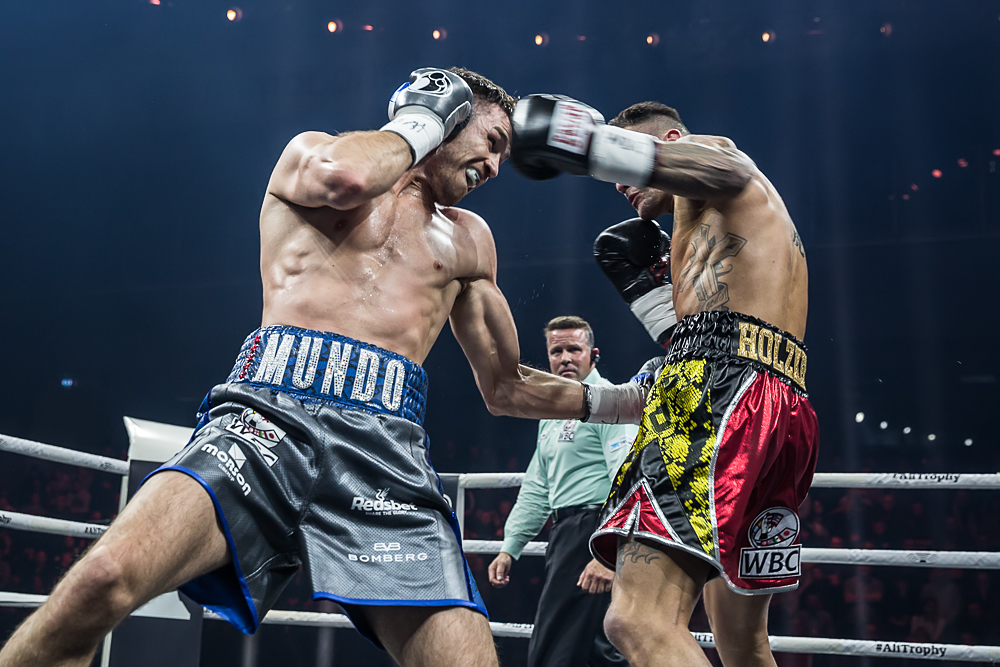 Talking recently to Gareth Davies from The Telegraph, Callum explained how he firmly believes this is his time as he heads into the grand final of the World Boxing Super Series.

Wiping himself down after a solid workout in a community gym in Bolton, Callum Smith looked up at the grey skies. It was a world away from his destination on Friday night when the 28-year-old, the youngest of four brothers who have all fought in world championship contests, meets George Groves in the Saudi Arabian desert with so much at stake: the status of world No  1 super middleweight on offer, a trophy for the cabinet at home in Liverpool named after “The Greatest”, Muhammad Ali, not to mention the prospect of grossing £7  million from the tournament as the winner. Fifteen years of graft and a sporting ambition is no longer a mirage in the desert.

“There’s nerves, but no more than any other fight,” explained Smith, before flying to Jeddah this weekend. “Every fight is a must-win. Every fight has been aiming towards this one. I do feel every fight I’ve had so far I’ve never really been fully satisfied. I’ve never really enjoyed any of my wins. No disrespect but it’s always been about the next title to get to being a world champion. I’ve finally got that chance now. I’m fighting for the chance to become the No  1 fighter in the division and the best in the world.”

Smith steps outside the training ring, through the ropes and mentions his three older brothers, Paul, Stephen and Liam. He has followed in their furrows. Now it’s his time.

“Boxing’s not as glamorous as people think, we’re not on footballers’ wages. There’s easier ways to make a living, unless you make it to the very top, but I always felt I was good enough to go on and become a world champion. In my next fight I want to tick that box. After that, anything is a bonus for me. I’m in a very good place, mentally and physically.”

Being there on the big nights around his brothers – Paul against Arthur Abraham, twice, for a world title, and Liam challenging Saul “Canelo” Alvarez – have all helped him for the greater occasion he must now face. “I do believe being there with my brothers has helped me, experience-wise. This is my first world title shot, but I’ve been all over the world at big fights. I’ve been in the changing room where we’ve been the away fighter, with the cards against you. I do feel that helped me. I’ve been abroad and out of my comfort zone. I do feel I’ve been through it all. That’ll stand me in good stead when I do get on the big stage in this fight.”

They are inseparable – father Paul, and the four brothers. Formidable, too, with a deep raft of knowledge. Smith also has the deep support and long-term relationship with trainer Joe Gallagher.

“The visas are sorted,” said Smith. “I think there was a bit of panic when it got announced as Jeddah. To be honest with you, I didn’t even know where it was. But it will be Dad, Paul, Stephen and Liam with me. Mum – [his mother, Margaret, can barely watch when her sons fight] – will be as far away from Jeddah as possible. As long as I’ve got the four at ringside, I’m comfortable. I take more advice off them than anyone else when it comes to boxing. I’ll be fine whether there’s 10,000 Brits in there – or four Brits. It doesn’t really matter as long as those four are there.”

Smith has come of age at a time when British boxing is booming, and although he would have wanted it earlier, the undefeated fighter with 24 victories – and 17 knockouts – reckons the timing of this is “just about perfect”.

“Regardless of being a boxer and where I am in my career, I’m a boxing fan. I’ve been around boxing my whole life,” said Smith. “British boxing is in a great spot at the minute. We’ve had more world champions over the last few years than we’ve ever had. It’s good to be a part of it.

“When you see the list of world champions, my aim is to put my name on this list. That’s always been my aim since I turned professional. It’s good to see Anthony Joshua doing 80,000 at Wembley. It’s given other British fighters opportunities to fight on the biggest cards. We’re showing our fighters can compete with the best in the world. Our fighters are the best in the world.

“But it’s exciting. There’s a lot of ways to fight George Groves. He’s done what every boxer dreamed, so I do credit him for that. But I do feel in doing all that he’s put a lot of miles on the clock. He’s an old 30-year-old and there’s only so many times you can put your body through it. I feel I’m the younger, fresher man. I feel I’m the better fighter and it can go many ways, but if I concentrate on me then that should be enough to come out with the win and the belt. If I beat him and take the Ring Magazine belt, then I’m in the driving seat. I firmly believe it’s my time.”