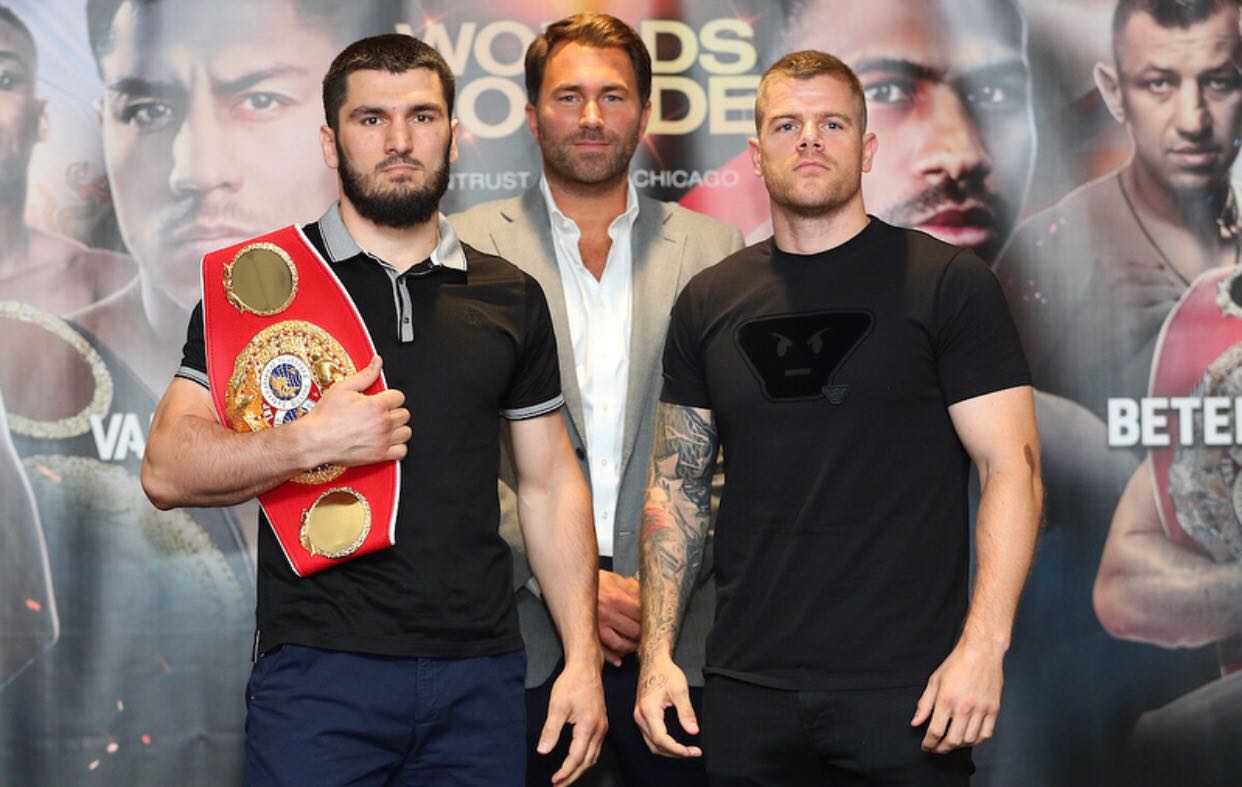 Ahead of the biggest fight of his career to date, Callum Johnson spoke with the BBC before his world title shot in Chicago.

Just days away from his world title fight, Callum looks strong and athletic. But there are tears running down his face.

The British light-heavyweight champion’s father, Paul, passed away suddenly in February 2016 at the age of 52. Six months later, Johnson claimed the Commonwealth title – but then came the crushing realisation that he could not share it with the one person he wanted to.

This weekend, at Chicago’s Wintrust Arena, Johnson will bid to pay the ultimate tribute to his late father when he takes on strong favourite Artur Beterbiev for the IBF world light-heavyweight title.

“If I win the world title, it will be everything, a dream come true,” Johnson tells BBC Sport, fighting his emotions.

“For my dad, just the thought of it brings me to tears. I can just lay that belt with him and say ‘we did it’. It’s the last thing I can do for him. It was our career, not just mine’

No stone is being left unturned in search of victory this weekend – and the inner peace that may bring.

Trainer Joe Gallagher – who recently guided Callum Smith to world glory – knows his charge is hurting. He spars with rotating partners, then moves on to pad work where he grimaces before collapsing to a stool between three-minute rounds.

“My dad started me out in this game and was involved all the way through it,” says Johnson. “He’d always tell me how good I was and always said I’d fight for world titles one day. It’s so nice to be able to give him that. He’d be over the moon.

“I think I made him the proudest man on the planet just by him watching me train. Where I’m at now, I’m sure he has the biggest grin upstairs.”

“The day I buried my dad I promised I’d win the Commonwealth and British titles for him,” adds Johnson. “When I finally got it, it was a weight off my shoulders.

“I can live in peace knowing I am fulfilling the promises I made. When you make someone a promise and they are still here, it’s probably easier to break it. When you make one to someone who is not here and they have passed, you can’t break it.

“It was our career – not just mine, ours. When I’d go out running there were no street lights where we lived so he’d be behind me with the lights on, beeping me if I slowed down. He lived and breathed every part of my boxing career.”

“Grief is a process. When you are that close to someone and have that strong of a bond, it’s hard to deal with. You miss them so much.

“I don’t know how to describe it as I don’t think there’s a right and wrong way to deal with it but I went through a bad time and have thankfully learned how to adapt, adjust and deal with it.”

Russian Beterbiev, 33, was a decorated amateur and has knocked out 12 opponents from 12 as a pro. It is a formidable challenge and the Montreal-based fighter starts as short as 1-12 with some bookmakers.

His opponent, though, is unfazed.

“I’ve been written off since I was a 16-year-old kid,” says Johnson, who stunningly upset the odds last time out, when he snatched the British title from the respected Frank Buglioni in just 90 seconds.

That said, in looking ahead to this weekend’s fight he is pensive, his answers sincere and considerate.

“At this stage, late on in camp, you’re thinking about the fight all the time. What could be? What will be? You visualise things in your head, winning, things that may work.

“You really have to try to knock out any negative thoughts, so it’s all positive stuff from now on. The bad things do creep in too. The key is to be as positive as you can.

“The win against Frank really showed people in British boxing what I’m capable of doing. Those around me spoke of what I was capable of but I suppose not many had seen it. It was nice to show it was the truth.

“I know I am up against it and I know I’m an underdog. But on my day, I can knock out anyone in the world, so let’s hope it’s my day.”

Sat on the ring-edge he explains his boxing journey is yet to yield the money required to make his future comfortable.

A win in the Windy City would be a likely gateway to lucrative opportunities. Johnson is an underdog eyeing the chance to change his life. This sport is full of them.

But this time around, there is a deeper meaning than purses, splits and status. This is the ultimate bout for dad.

“It would put a perfect ending to a bad story,” says Johnson. “I could forever live in peace and that’s what I intend to do for him.”